Everyone benefits from vehicle exhaust systems, both drivers and non-drivers alike. The system works within your vehicle to minimize air and noise pollution by converting harmful gases into less harmful ones and by dulling the noises emitted from your car. If you’ve ever been driving behind a car that smells like sulfur and has a cloud of smoke around it, you know how beneficial exhaust systems are. There are three main components to an exhaust system including a catalytic converter, a muffler, and a tail pipe. The catalytic converter is responsible for converting harmful gases, like carbon monoxide, into less harmful ones. Cars that have a sulfuric smell coming from their exhaust pipe have a faulty catalytic converter. Mufflers, on the other hand, dampen engine noise and change its tone. Malfunctioning mufflers will cause rattling noises or blowing noises if there is a hole. Finally, the tail pipe is responsible for directing the gases away from the engine and out of the rear of the vehicle. Most exhaust problems will not directly affect the drivability of your vehicle, but because cars emit dangerous gases, it is important to stay on top of repairs.

A vehicle’s exhaust system has two responsibilities—to minimize the vehicle’s air pollution and to make it quieter. The catalytic converter’s job is to reduce harmful emissions in a car’s exhaust. As an engine burns fuel, it releases an exhaust that contains dangerous gases including carbon monoxide, hydrocarbons, and oxides of nitrogen. These gases pose serious environmental and health threats and greatly contribute to the formation of smog. The catalytic converter breaks down these harmful gases into harmless carbon dioxide, oxygen, water, and nitrogen. It does this by creating an internal catalyst that consumes the majority of the gases flowing through the converter. Catalytic converters have to operate at temperatures between 400 degrees F and 1000 degrees F to function properly. Anything that causes that temperature to go above or below that range will cause structural damage to its ceramic body. In particular, if the engine misfires and sends un-burnt fuel into the converter, it will result in overheating. Conversely, if the converter is cooled too quickly, the ceramic will crack. In both cases, the engine will suffer a severe loss in power and a rattling noise will issue from the converter. It’s important to have any issues with the catalytic converter fixed as soon as possible. Because cars emit dangerous gases, it’s important to make sure that their

As part of our commitment to protecting our customers and the environment, Rieger Motors recommends that your catalytic converter be checked periodically. When emissions problems are caught early, damage to your vehicle and the environment can be prevented. If you’re experiencing any of the issues mentioned above, come by our Forrest, IL location. Our team of expert technicians is standing by to get your car running clean. 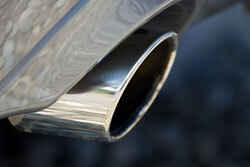